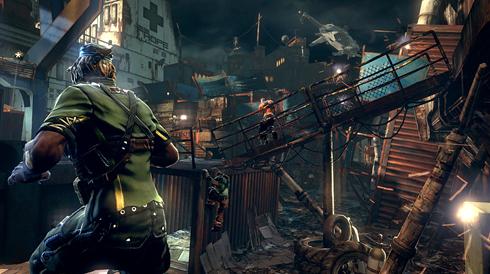 James is at Eurogamer Expo 2010 in London, and while he’s trying to enjoy himself at his first games showcase, he’s also trying to work and get some hands-on time. This is one of several previews of games featured at this year’s event.

Often enough we’ve seen the term “squad-based shooter” bandied around by production companies and developers alike, but the games just end up being Rambo-style free for all shooters with the only clear objective being to kill whoever’s not on your team. Certain modes in games like Counter-Strike, Modern Warfare 2 and Bad Company 2 do provide some form of objective-based combat to an extent, but proper teamwork is largely few and far between. Brink looks like it’s going to be the big shooter that will change this.

Developed by Splash Damage, better known for their work on id’s Enemy Territory games (Wolfenstein, Quake Wars) and the multiplayer component of Doom 3, and published by id’s new publishing partners Bethesda (Fallout, The Elder Scrolls), Brink looks to push the boundaries further with Splash Damage getting their own original IP to work on.

Brink is set on an island city called the Ark, but is completely overcrowded due to floods ravaging the rest of the world, and there is now not enough resources to go around. The Resistance is fighting for fair management and allocation of the Ark’s resources, which they believe the Security to be withholding from certain sections of the public, much in a “rich get richer, poor get poorer” manner.

The multiplayer is broken down so that there are 4 classes to choose from, Soldier, Engineer, Medic, and Operatives. The particular mission I played, I was a member of the Resistance trying to protect supplies from being reclaimed by the Security. Our objective being simply to fend them off for a set period of time, theirs to being get in and come out with their supplies. They had to escort a sentry bot throughout winding city streets, using the various classes to overcome obstacles, such as using a Soldier’s demolition skills to blow open a hole in a wall so the sentry could drive through, and an Engineer to operate a crane to lift the bot across a gap while the rest of the team traversed on a foot bridge too narrow for the bot itself to travel over.

In addition to these skills being a key component to completing missions, the classes each have their own perks on the field of battle. Soldiers can carry extra ammo, and take from their supply to replenish others who are running low, Engineers can buff other players’ weapons, Medics can both heal as well as revive downed opponents – handy to have someone come back where they died before instead of respawning a few moments behind everyone else – and Operatives can interrogate downed opposition fighters who are near-death and obtain intel from them about weapons caches, locations of enemies, as well as being able to disguise as the enemy and go deep undercover for some unexpected (to the other team) kills.

Some would say the particular mission I played and described could be summarised by saying “It’s just like any Payload map on Team Fortress 2. And in a way yeah, of course it is, but again, almost every escort-based mission will be similar in nature to each other. But it’s the style of shooting and the planning that has to go behind the playing in Brink, that looks to set it apart from its competition. It’s crazy almost anarchaic/apocalyptic stylings, it’s SMART (Smooth Movement Across Random Terrain) parkour movement system, its vast array of character customisation options, as well as a heavy single-player mode that we’ve come to expect from games bearing the Bethesda banner, all will blend together to give us what could be one of the most unique first-person shooter experiences 2011 will have to offer.